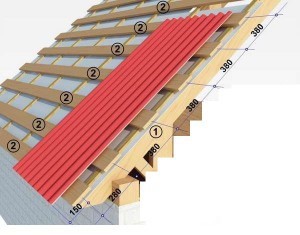 Starting roof sheathing is fastened to the bottom edge of the roof beams.
To perform lapping of the bottom row of plates (75-100 mm), the size of the first spacing of roof sheathing should be 280 mm. To properly calculate the required number of sheets to cover your roof, it is necessary to draw a scale on a graph paper, with the lateral – 50 mm and end – 100 mm overlaps (figure 2). 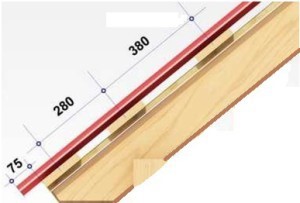 Mounting Keramoplast roof can be done in two ways:

The first – one row offset with respect to the other in a half of the sheet width, so that the joint of the two sheets of one row falls on the middle of the sheet of another row. This method is called – “laying with an offset”, it enables to avoid overlaps of four sheets at the joining site (figure 3). 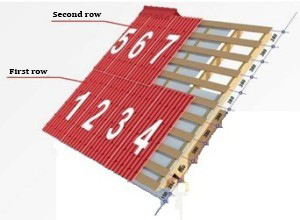 The second method – standard (figure 4); laying is performed in “staggered” ordering, without an offset of sheets: in such a case (figure 5) overlaps of four sheets at the joining site occur. 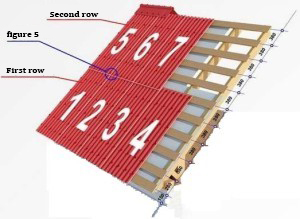 In the case of Keramoplast roof mounting using “staggered” ordering (figure 4), in order to reduce thickness of overlaps of four sheets in a joining point at the joining site and improve the aesthetic appearance of the roof, it is necessary to cut corners of the two middle sheets as shown in figure 5. In that case, horizontal distortion of surface of the roof covering is out of the question. 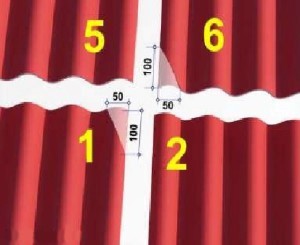 If it is required to cover a large area, it is recommended to lay the first lower row first to simplify installation. Then, the side row to the ridge is laid under the angle of exactly 90 degrees. Then, the following sheets are sequentially laid horizontalwise with regard to the lower and side rows. Primary fastening of sheet shall be carries out roughly: starting two or three mounting screws for each sheet (figure 6). 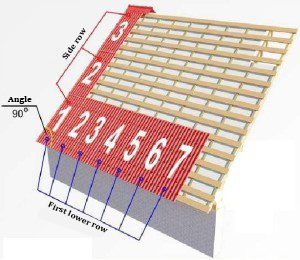 Before completely and permanently fastening the sheets, it is necessary to ensure proper installation of the side and end overlaps. A stretched rope can be used to help perform fastening strictly on the center of line of roof sheathing boards.

When fastening the sheet, it is not recommended to overtighten (with screws or special nails) a peak of the corrugation (figure 7) to avoid deformation .in case of a rapid change of temperature. 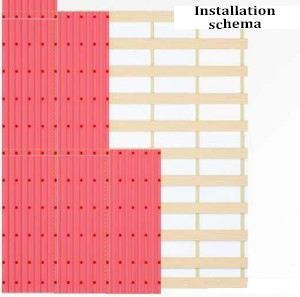 A place where two roof slopes come together is called “ridge”. “Ridge” is fastened only when all the sheets of the roof are mounted. Before permanently fastening the “ridge”, make sure that it covers the first row of fasteners on the sheets (figure 9). 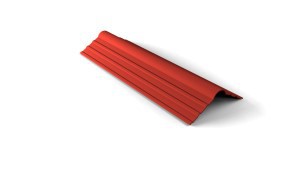 “Ridge” is mounted successively with the lock element through the entire length of the crest using special nails or screws with caps. The spacing is similar to the spacing of sheets fastening to the roof sheathing (passing a corrugation), 12 fastening elements per a ridge detail: 6 on each side (figure 10). If the angle of the ridge of the roof is more or less than the angle between the wings of the “ridge” element, it is necessary to heat it from the inside to the temperature 50-60 degrees using a hot air gun or blow torch and bent it to the desired angle. 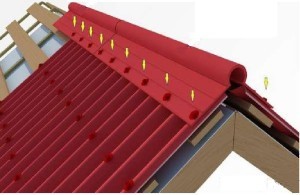 “Ridge” is also used to frame the top of fences, parapets of buildings and constructions, various structural elements overhanging above the roof, which have the width corresponding to the possible “wing”-spread.

To seal the roof and prevent the ingress of rain and dust in the under-roof space, and also for hiding of edge assembly elements and structures for upgrading gable roof windows, “wind board” is used. It is attached with the help of 6 fixing elements: 3 on each side (figure 11). 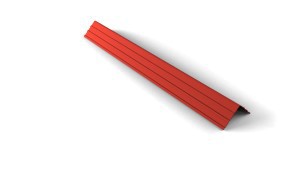 Installation of “wind board” is performed successively overlapped on the lock, starting from the lowest point and moving upwards along the edge of the roof to the upper end of the covered area. One wing is placed on the roofing sheets and fastened thereto, and the other end is fastened to the rafter beam. Fastening is carried out by using the same elements as during the sheets fastening with the spacing similar to the spacing of roof sheathing. Each wind board has six fastening elements: three on each wing (Figure 12). 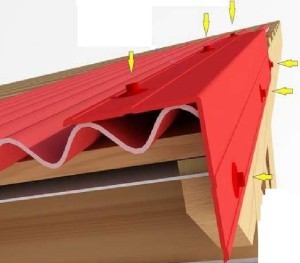 When mounting the roof, tin zinc may be applied in valley-shaped junction sections (figure 13) from the inner side of the joint for sealing purposes. Wind board of the color of the roof is mounted on top of it. To give the wind board the desired wing angle, it is necessary to heat it from the inside to the temperature 50-60 degrees using a hot air gun or blow torch and bent it to the desired angle.
Figure 13 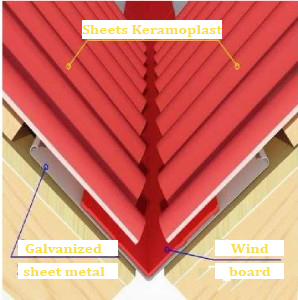 Types and profiles of sheets Keramoplast: 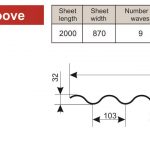 Corrugation with a capillary groove 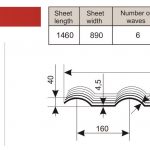 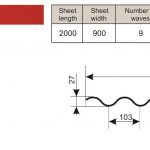 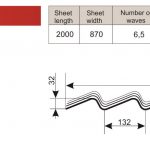 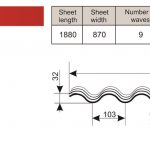 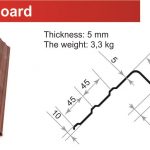 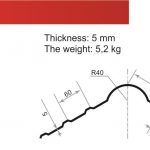 At the joining site where four sheets overlap, it is necessary to cut corners of the two middle sheets as shown in Figure 1 (a, b) to reduce the thickness and improve the aesthetic appearance of the roof. In this case, horizontal distortion of surface of the roof covering is out of the question. 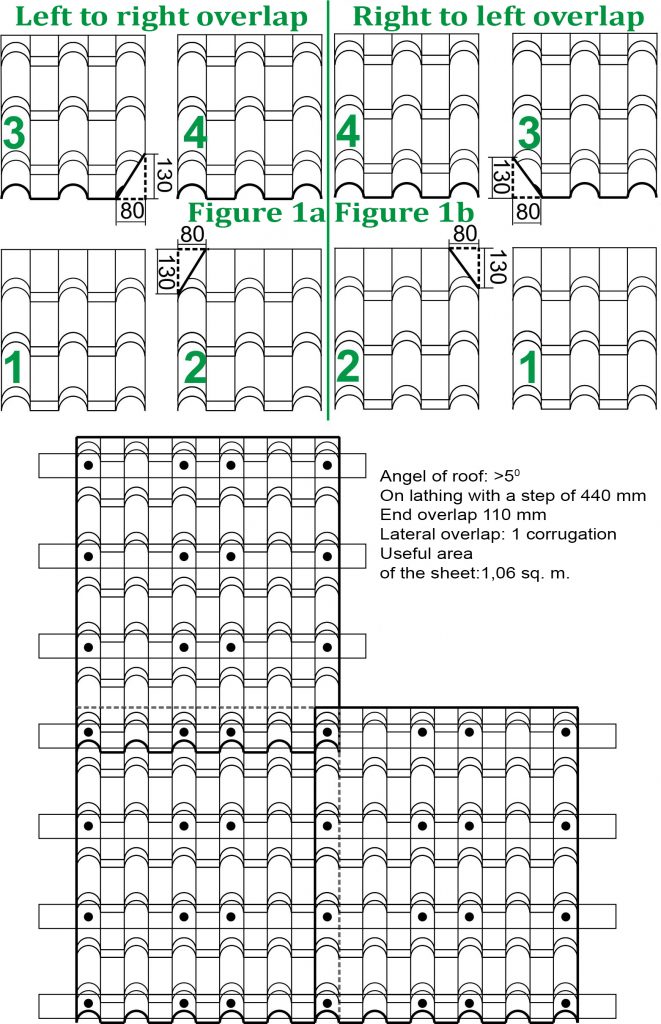 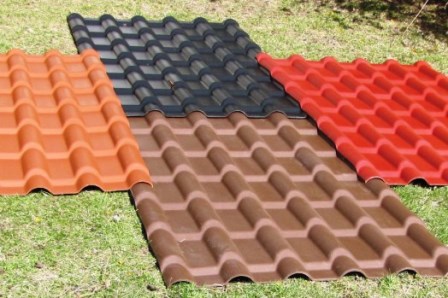 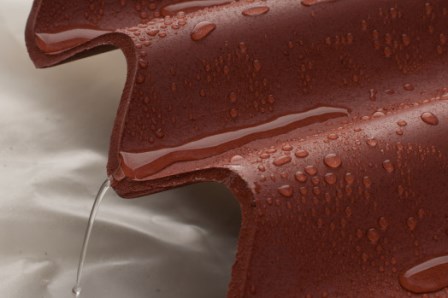 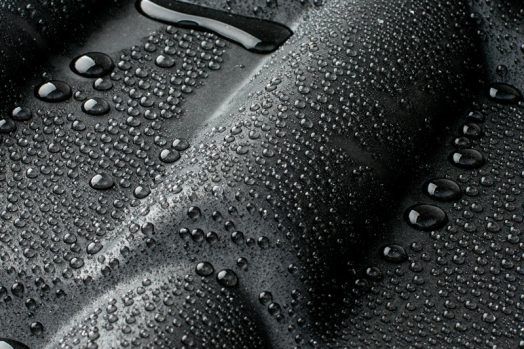 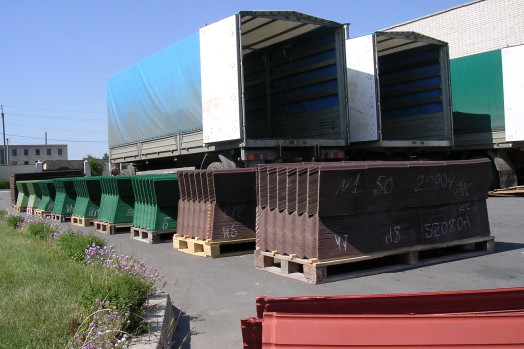